Walter Accigliaro was born in Alba (Cn) in 1950; he still lives and works there. He has got his high school degree in Turin, and has then studied at the Accademia Albertina delle Belle Arti (Academy for visual arts) with Paulucci, Saroni, Calandri and Franco.

He teaches painting at the Art School in Asti. Since 1970 he has been involved in studying and preserving cultural monuments.

He as worked and works in the “Italia nostra” association and in the books it has published; since 1980 works in the famous magazine “Alba Pompeia”.

In 1984 he has been a member of the organizing committee of the exhibition “Pinot Gallizio 1955-1964” and in 1989 of the exhibition “The 4 suns” in Alba. In 1988 he has worked with the Commune of Alba in organizing a series of conferences called “Structures of contemporary art”, of which he has given an introductory speech. In 1994 he has given a public speech, organized by the “Lions” club of Alba, on the artist Pinot Gallizio, in the trentennial of his death.

In 1995 he has become artistic director of the “Astisio” association in the Roero.

Since that same 1995 he works with th eCommune and the Pro Loco of Castiglione Falletto for the critic and effective organisation of the annual artistic exhibitions of the “Confraria” gallery.

Since 1996 he cooperates with the Commune of Barolo in the organisation of the modern art exhibitions in the castle. In the same year he has cared for the catalogue and the exhibition of Dedalo Montali in Rodello.

In 1997 he has publicly presented in the “Gigi Rosso” cellar in Castiglione Falletto a critical review on Enrico Baj, with the presence of the artist. In 1998 he has given the job, by the bishop’s court in Alba, to dispose the routes for tourists for the great Year 2000 Jubilee.

As far as his artistic production is concerned, Accigliaro has started participating in personal and group exhibitions in 1971. He is also the author of graphic works, affìches and posters for cultural happenings and fairs.

He has realized some books’ covers, and the cover of the political magazine “La luna e i falò” (the moon and the bonfires;1984-1986). In 1989 he has participated in the first issue of the magazine “After tomorrow. International box for art”, writing an article and mking a special lito/offset for the occasion.

As far as his personal experiences are concerned, in 1987 he has experimented the traditional techniques of ceramics in Albissola, in the Pagliaro and Soravia laboratories. In 1988 he has been one of the founders (with Romano Reviglio, Maria Gabriella Stralla and Francesco Preverino) of the artistic group “Progressiva 7” (1989-1990).

He has also met, during the years, many local writers and artists, either from Piemonte (Scroppo, Agosti, Rotta Loria, D’Angelo, Omedé, Montali, Ramella etc.) or from other countries (Pavel Bucur, Henri Spaeti, Paul Goodwin).

Seriousness, sensibility, an open mind are the elements that define him best. The cultural experience of Walter Accigliaro has developed to civil participation, expressive multifunctionality, and active research. 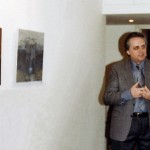 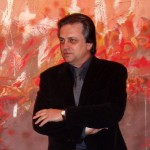 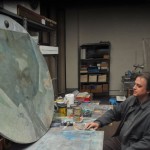 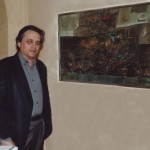 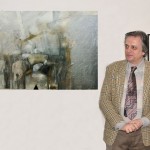 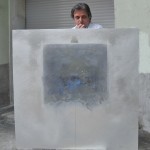 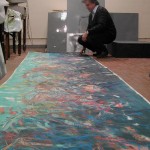